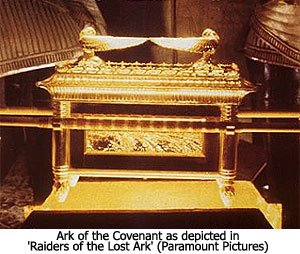 
The Ark of the Covenant is a Golden Rectangle*
In Exodus 25:10, God commands Moses to build the Ark of the Covenant, in which to hold His Covenant with the Israelites, the Ten Commandments, saying, “Have them make a chest of acacia wood- two and a half cubits long, a cubit and a half wide, and a cubit and a half high.” The ratio of 2.5 to 1.5 is 1.666…, which is as close to phi (1.618 …) as you can come with such simple numbers and is certainly not visibly different to the eye.  The Ark of the Covenant is thus constructed using the Golden Section, or Divine Proportion.  This ratio is also the same as 5 to 3, numbers from the Fibonacci series.
In Exodus 27:1-2, we find that the altar God commands Moses to build is based on a variation of the same 5 by 3 theme: “Build an altar of acacia wood, three cubits high; it is to be square, five cubits long and five cubits wide.”
Note:  A cubit is the measure of the forearm below the elbow.

​Noah’s Ark uses a Golden Rectangle
In Genesis 6:15, God commands Noah to build an ark saying, “And this is the fashion which thou shalt make it of: The length of the ark shall be three hundred cubits, the breadth of it fifty cubits, and the height of it thirty cubits.” Thus the end of the ark, at 50 by 30 cubits, is also in the ratio of 5 to 3, or 1.666…, again a close approximation of phi not visibly different to the naked eye.  Noah’s ark was built in the same proportion as ten arks of the covenant placed side by side.

“Its north-south extent was over 50 miles, and its east-west width was around 30 miles.”
“It was seen in Arizona, Colorado, New Mexico, and even northern Mexico
(Juarez, about 380 miles from the southern tip of the cloud-ring).”
—Weatherwise, June 1963, pg.99
—James E. McDonald, Institute of Atmospheric Phycis, University of Arizona, Tucson


We find the approximate measurements of the cloud of angels is the same Biblical 5:3 (1.666) proportion as the Ark of the Covenant, The Altar, and Noah’s Ark. It is worth noting that the cloud was seen by eyewitness as far as 380 miles away. This may be seen to correspond with the length of Noah’s Ark—300 cubits. The cloud was seen from 3 states and another country—Ciudad Juarez, Mexico known as “The City of the Future.” 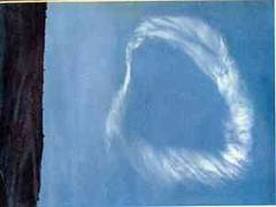 Matthew 24 Rotherham(i) 37 For, just as the days of Noah, so, will be the presence of the Son of Man;